NEWS RELEASE: At ICT4D, Zerion Software’s iFormBuilder is on everyone’s lips (and iPads)

Mobile data collection app company didn’t set out to save the world, but is happy it is helping in International Development Projects with the likes of CRS, USAid, NetHope, The Hunger Project and others.

“Catholic Relief Services (CRS) believes that using technology is the best way to help serve the poor and vulnerable. CRS also believes in open and free discussion to facilitate learning between organizations.”
iFormBuilder Mobile apps are the best in data collection, and CRS showed them off in this video promotion innovation and excellence in international development.

As Catholic Relief Services‘ Michele Broemmelsiek, Vice President of Overseas Operations, spoke at the opening of the 2014 International Development Conference for Development (ICT4D), the message was clear— technology can make the world better. And as many attendees learned, this company’s technology, a mobile data collection app for Android and iOS, was at the forefront of many of the week’s presentations. As each day of presentations by NGOs (Non-Governmental Organizations) progressed, a mass of testimonials showed that iFormBuilder was being used for a multitude of uses.

“Using iPads/tablets with iFormBuilder in the field for The Child Behind project allowed staff to collect data, which leads to improved programmatic decision-making and accurate measurement of results.”

After the cyclone in Madagascar in Feb 2103 … ” CRS Madagascar used iPod touches with iFormBuilder to quickly collect accurate data that could incorporate drawings, pictures, signatures and GPS. It cut data collection down from 3.5 weeks to 72 hours.”

Even when not speaking directly about iFormBuilder, it was the app’s features that were being talked about. As an Esri representative stated:

“GIS maps can help NGOs integrate and apply knowledge. The visual layout helps to synthesize information from lots of different sources for a comprehensive picture. It also is a tool to show donors the impact and scale of projects.” 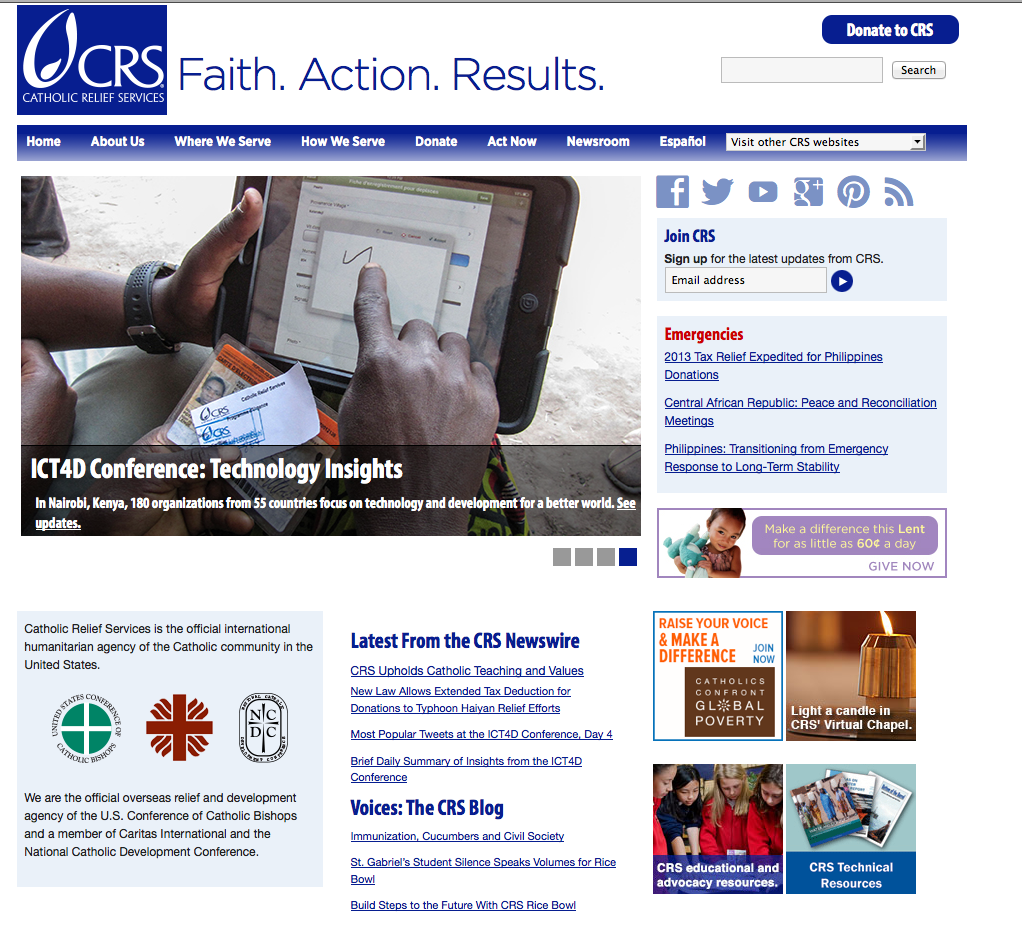 iFormBuilder mobile app is shown on the front page of the CRS, as part of ICT4D

iFormBuilder is used not only in pinpointing data in a geospatial way, but also is used for the all-important “Monitoring and Evaluation,” the NGOs and international development companies must do to qualify decisions and quantify their actions. And for work in an ulta-disconnected environment, like much of Africa, the iForm team has released ThunderPlug, a wireless data collecton hub that can run on solar power– deemed the “baby cloud” by some at CRS.

“We didn’t go looking for NGOs,” stated Sze Wong, iFormBuilder CEO, adding, “but NGOs found us, and have been teaching us all the things they can do with it.”

CBO Chris Reichart agrees. “When we started up the iForm apps project, we thought that hotels, marketing firms and maybe some engineers would use it. That was all true— but what we see here with CRS and the other International Development groups— it’s just fantastic.”

iFormBuilder is available in the Apple App Store, as well as at Google Play. Right now it is also being facilitated in EHS, Medical, BioHazard, Engineering, GIS, and other fields where mobile data collection has replaced the traditional clipboard.