The iFormBuilder 8.5 and 8.6 Updates brought exciting changes to the platform! Read on to learn more about the improvements. Have an idea for something you would like to see in the platform? Vote for Features or Submit and Idea in the Customer Success Community! 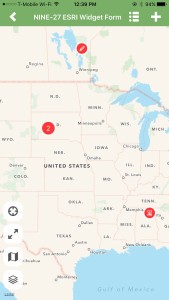 The biggest iFormBuilder 8.5 update for iOS was in the map interface. The additional controls and cleaner map view will make it easier to integrate with your GIS projects and identify project locations.

Another enhancement is with images in the Manage interface. What previously use to be a single thumbnail is now a bit more dynamic. A long press on the image, within the Manage view, will show a larger version of the image — allowing project managers to see the image in greater detail.

The iFormBuilder 8.6 update has a new widget — Timer! Similar to a stopwatch, the Timer widget is used to measure the amount of time elapsed in seconds. You may have multiple timer widgets on a single form.

Additionally, Form and User Groups are now available through the API. Group names can be identical across different profiles, allowing for better organization and consistency.