Some Big Data Builds Itself 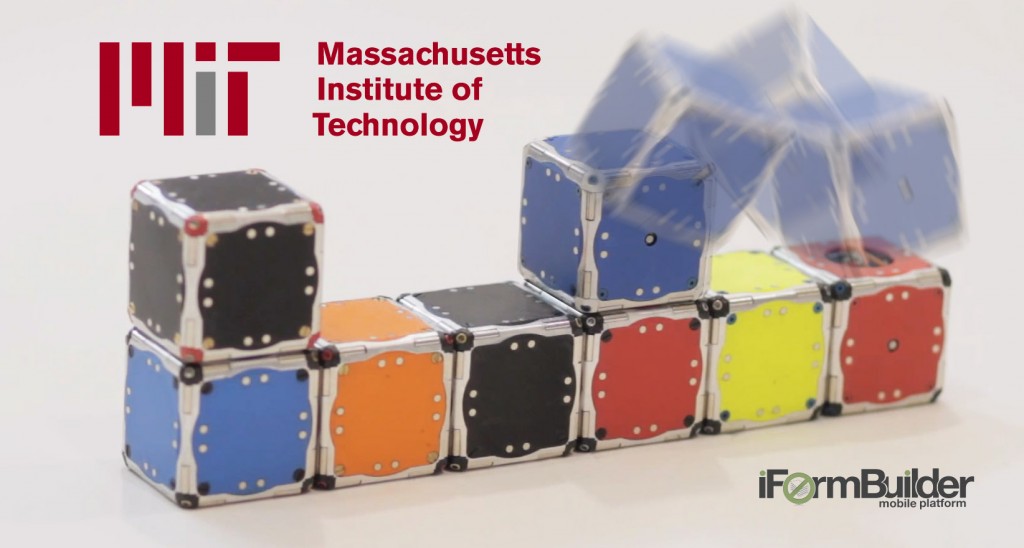 Anyone who has done Field Data Collection, whether on paper or using iFormBuilder’s apps for field data collection with mobile devices, knows that sometimes the data can lead to bigger questions. Unusual responses to queries in the field can show that some questions are not being asked. So, forms are refined, resulting in bigger data, and more information than was expected. But what if you could apply that flexible form mentality to robots?

A recent article at the TechCrunch website covers a story about how MIT Scientists have created modular robot blocks that can self-assemble and reconfigure. The cubes, with no outside moving parts are simple looking, yet sophisticated in how they work:

“The cubes’ ability to move results from harnessing the momentum of an internal flywheel (which can hit speeds of 20,000 revolutions p/m) — allowing them to climb over one another, make jumps, spin and roll around. And do all that without the need for wheels or legs.”

Like the nanotechnology of some science fiction novels, the plan is to miniaturize modules to such an extent that swarms of self-assembling robots will be capable of reconfiguring themselves into “different forms, shapes and sizes, and changing their function” as needed. Imagine a mission to Mars, in which a module made air purifier suddenly reconfigures itself to be a water filtration system. Although the technology is far from ready for a trip to the red planet, the MIT is working on developing the modules further.

“Large numbers of the blocks could be used to temporarily repair bridges or buildings during emergencies, for instance, or raise and reconfigure scaffolding, or assemble different types of furniture or heavy equipment.”

The current modules could each be fitted with different functioning items, such as a camera or microphone, not unlike the camera and audio collection widgets in iFormBuilder mobile apps for iOS and Android. So, just as forms and data collection are evolving, and will evolve, so to will microbots help space travel, construction, and infrastructure development.

See the video below for more

Want to try out the next step in the Evolution of Field Data Collection for iPods, ipads, Galaxy Tabs, and more? Sign up for a Free Trial and take iFormBuilder for a test drive.