The human side of data collection 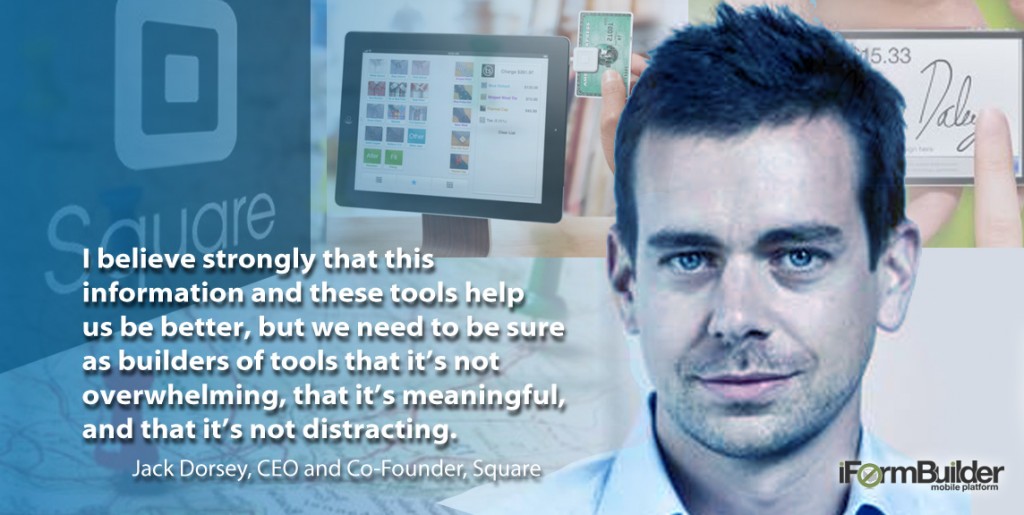 Jack Dorsey focuses on the “humaness” of technology.

iFormBuilder tries to focus on the user– the human side of technology. And that’s why we love Jack Dorsey of Square.

In a recent blog we focused on Apple CEO Tim Cook’s statement (paraphrased here) that if a lot of people are using your app, you must be doing something right.

But another element to greatness is, if people are able to grow and thrive using that app, it is then that technology becomes a tool to make the world a better place.

At the GigaOM RoadMap conference held in San Francisco last week, GigaOM’s founder Om Malik spoke on stage with Jack Dorsey, CEO of Square. No surprise to no one, Dorsey showed a great sensitivity to technology as a tool not just to speed up business and productivity, but to “encourage more face-to-face human interactions.” After all, the basis of Square’s technology is to allow a quicker transaction of services and goods, in an inexpensive way, in any marketplace.

As stated at the GigaOM site, Dorsey focused on the best technology makes humans more human towards each other:

“Both [Twitter and Square] are great at encouraging more face-to-face human interactions… I believe strongly that this information and these tools help us be better, but we need to be sure as builders of tools that it’s not overwhelming, that it’s meaningful, and that it’s not distracting. That it’s not something that puts technology first; it puts humans first. And the humans’ use of the technology first.”

Dorsey also focuses on ease-of-use, and how this allows small business owners to focus on what is important, the business itself, and the people it affects. As Dorsey added:

“The arc that fascinates me the most, is the arc that reminds us of our own humaness.”

We at iFormBuilder agree– that’s why we are so excited our app is used in over 110 countries by NGO’s reviewing water supply structres for African villages. Or lab managers at Stanford, conducting safety audits, ensuring proper testing of blood samples in vaccine testing. And so on — because we are reducing the time between collecting the data, and consuming it.

To read more and learn about GigaOM, click here >>

Simplify your data collection, and focus on what is important, download iFormBuilder, the Best Mobile Data Collection Apps for Android and iOS